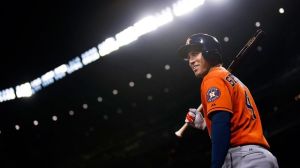 There is no denying the upstart team that the Astros have become this season is part über talent, part youth, and part general attitude. This team is made up of fantastic talent; Built for speed and power, Nails defense, Lively arms. It’s built from homegrown talent where most players are still under their original contracts. (Besides the cubs the youngest team in playoffs) And attitude??? Call it Mojo, moxy, luck, dumb luck, enchantment, wizardry etc…but this team doesn’t know any better. They don’t know to shy away. They don’t know to pucker. They don’t understand intimidation. This team has risen from the depths of 100 loss seasons and they truly feel they can keep rising as long as they believe. AND AJ Hinch has anchored that belief. Molded it. Directed it. Sold it up and down that clubhouse so much so that the buy in is complete and total. This is a team that believes it can win. And that now is the time…

And on AJ Hinch, his hunches have played out beautifully over the last month. So much so they should be called Hinches rather than Hunches. A few cases on that point:

Hinch 1-Continue to believe in a bullpen even when they are struggling to close the season out.

Hinch 2-Sit one of your trade line acquisitions (Gomez) the last month of the season and bring him back for a payback HR in the wildcard game.

Hinch 3-Pitch your ace on 3 days rest and leave him in with 2 on and 2 out in the 6th to face the most dangerous Yankee hitter in A-Rod (of course after going to the mound for a “heartbeat” check.)

Hinch 4-Leaning on Carter who had struggled at the plate all year only to transform himself to HR hitting, On base percentage giant to close the year.

His fingerprints are all over this team. Which is precisely why the rotation decisions should surprise no one going into the playoff series vs the Royals. With McHugh pitching game 1 and a surprise Kazmir for game 2 in KC. Hinch is banking on stealing one in KC and he has a 19 game winner to start and a player who faded the last part of the year pitching in game 2. The Hinch here is that Scott Kazmir has pitched well against this team before. (7 innings, 0 earned runs and only 3 hits, all singles in his Astros Debut)  This also sets up Kuechel in game 3 at home where he is undefeated this season.  The thought is possibly to bring Kuechel back in the 5th game if necessary on 3 days rest again.  (The game 4 and 5 SP’s have not been announced at this point)

First off the Royals starting pitching is hittable. They posted a collective 4.34 ERA which is the highest of all the playoff participants (Astros starters combined for a 3.42 ERA). KC’s bullpen however is a different story and why they like close and late games. The Royals who cruised through the AL last playoffs in a similar run to what the Astros would like this season are still dangerous and now come in with some experience in playoff games. Both teams this season scored a similar amount of runs but they do it in different fashions. KC base by base- Contact hitting, put the ball in play-see what happens. Astros like to take all 4 bases at once, and if they only get 1 they are likely to steal the next one. The Astros  strikeout a lot, The Royals very little.  The Astros walk a lot, The Royals very little. This bodes well for the Astros strong defense but also means they might have a few warning track fly-outs in pitcher friendly KC.  The key will be who gets the timely hit and if the Royals can avoid giving up a big inning early to the Astros who will be looking to post crooked numbers against their starters in these contests.

The Astros owned the season series winning it 4-2 while posting a 3-0 advantage at home.  This is a close matchup on paper but I think the Astros will steal one in KC which will set them up to close it out in Houston.  Astros advance in this series in 4 games.